First week of NaNoWriMo is out the way and SuperGod is coming along nicely.

Have managed to pick up where I left off last year with my writing ethos (wish I was this constant through the other eleven months of the year) and I am putting good word counts in. SO good are these daily word counts that my opening aim to cross 10,000 by Monday 6th was smashed when I somehow managed it by Saturday lunchtime.

As I mentioned before, a lot of this early writing is rewriting a previous version of this story. There are some scene and character changes, and I'm trying it in third person instead, but it's all from scratch without copying from any previous draft. It's like trying to write down the plot of a movie I watched twenty years ago. I remember the broad parts, but the details will be different. This way it's not an exact copy, but still the rough story I wanted to tell.

Writing when I perhaps shouldn't have been, I managed to hit almost two and a half times my required word count. It's been fun switching the view point and having to write with a little less info coming from the character's heads. And having the end game in my head this time around is allowing me to fill out extra details as I rewrite old chapters from previous attempts.


A good end to the work week with almost double the 1667 put down. Still going through old ideas and fleshing out more, but little bits are growing new parts that may or may not lead somewhere. That's the fun of NaNo and no editing until January 2018.


In the early days of my NaNoing (also known as 'before my son was born') I did most of my writing at the weekends. But since 2012, weekends have always been a difficult time to find a spare hour or so without the little guy wanting my attention, or as is more often the case, not wanting my attention but wanting to make noise. So I was surprised that I managed over 2000 words while at home this day. My son spent some time playing in the garden, while I sat at the dining room table cranking out my word allowance.

I needed to hit 10,000 by close of writing Monday. But passing that Saturday lunch time was nothing but positive. Hoping the rest of the month carries on like this.

One good weekend day of writing is special, but two in a row? Miracle.


Another good day of writing which I started on the train using my phone (love Google Docs). While walking from one building to another at work I did hit a revelation regarding the first chunk of story; I would be deleting a couple of thousand words when I got round to editing (not yet, because we don't edit in November, do we?).

The section has been in every version I've written of this story and then I realised while I was thinking about it that the section is unnecessary, that it just bogs things down. If you take it out it changes nothing (except the reader's time is no longer wasted). And better still, the thought of it going doesn't bother me, so that's a good sign.

At 1667 a day, Monday needed to have me at 10,002 words. Somehow, with a strong start to this November, I was sitting at 15,293. This is a massive confidence boost, and as with last years story UTOPIA FOR PEARS, I have a lot in my head, so I don't think I should hit any lulls.


Busy day today so words were a little slow at getting to page, but a splurge around lunch time took me close to the daily 1667 and then a nice gap in the afternoon coupled with a brand new tangent in a scene carried me over the 2000. I'm about to cross the line now away from my original attempts of this story, so looking forward to seeing what happens next. I have a plan, but it's all uncharted.


Another day of early writing, plus a half day from work allowed me to get some good writing time in. I meant to stop around 2000, but an idea for a scene kept me going and I rolled over 3000 just before dinner time.

And that's it for now as I start the second week of NaNo 2017. I'm stronger than any NaNo I've done before (just) and I feel like I've got enough 'Imagination Fuel' to keep going and not hit any road blocks.

How are you all doing? Is this your first time, or are you a seasoned pro? Let me know in the comments below, and remember to keep writing. 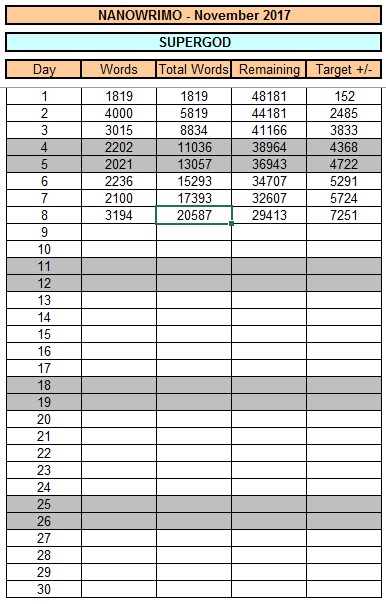