It's early days (the earliest) but I've started and that's what matters.

In my planning I've written several chapters previously, and keep changing my mind which one is 'Chapter One'. Today I finally settled on one and it feels right. Previous attempts were always the start of the first third of the novel, but now I've got it planned in a bit more detail, it makes sense to open where I have. Of course anything can change before this hits readers minds, but for now, I'm happy.

I'd written this scene before where our main character Gareth Dunsford was introduced. He works at Megamovies video store and has a strange encounter that, unknown to him straight away, will change his life in some really cool and crazy ways.

In previous attempts of both this scene and the story, I've written in first person. This led to Gareth being a funnier (to himself at least) and bitter character. I'd always thought this story would be first person but was surprised when I sat at my keyboard today and found that I started in third person instead. And so far (two scenes) it feels better. Gareth feels more like I want him to be, and in turn he helps the book become more like what I want from it. Fingers crossed it works out.

And I not only hit the good old 1667, but went a little over. Nothing feels better during NaNoWriMo than having extra words in the bank. 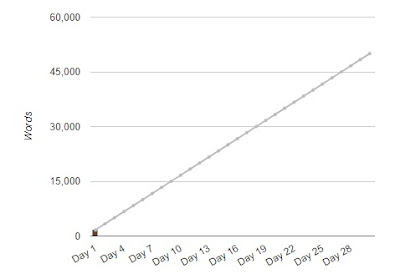 That's all for now. November 1st almost snuck up on me this year (busy week last week and then off work with mild kidney stone pain). But I got started and now it's 29 more days to see what comes out of my idea.

Let me know in the comments or on twitter (@BrianSCreek) how you're doing and shout out your word counts.

Next weeks update with be a little fuller.