Half way through the month. How exciting


I love days like this one. It started slow and I was thinking that I wouldn't make it past the 1667. As I was closing out my writing for the day  I thought I'd just set up the next chapter so it was easier to begin day 10. And then I couldn't stop typing. I was having brain waves and wanted to get them down  quick before I forgot them. I was trying to type faster then I physically could; my fingers hurt by the time it was over.

And then I'd check my word count and see I was 60 words from a milestone so I;'d add a little more. But then I was close to another milestone, and I kept that up until I was more than double my daily target.


Managed a quick sprint on the train journey and made it to within 700 words of the 25,000 half way point. That's the quickest I've gotten to half the November word count target. I'm hoping that I can keep the pace up, hit 50k by the 20th, and make 75k my finale (personal) record breaking total. Lets hope.


I mentioned that last weekend was a surprise result for me as weekends are usually tough to find a decent window. Well the 11th was weekend business as usual. It was the first day this month where I had zero word count in the books before noon. A trip out with the wife and child meant I didn't get behind the keyboard until 4:30pm, and formula 1 in the evening meant I had to make a small window count. Thanks to an action scene that plays homage to a 2006 action superhero movie, I managed to just cross 2000 before calling it a day (night).


Typing away late this day, due to a birthday party and the penultimate race in the F1 calendar. Luckily I managed about 800 words while sat watching my son play at Monkey Bizness, and the rest once he was in bed. I left the scene hanging as I ran out of time and wanted to hit the ground running when I was back on track the next day.

This scene was mostly tying up the previous and then finally hitting the big plot point behind the whole story.


After a leaner weekend than I wanted (though it was expected), I bounced back today with another count crossing 3000. This was helped by a scene where the background of two major characters were revealed and, in a strange moment around the 2500 mark, I suddenly decided that a good twist was needed and felt right. So while the hero was talking to another main character for 2500 words, I flipped it, and made out that it was the villain the whole time. Then the other character turned up and a fight ensued.

None of this was in my loose plan. It simply said 'Character B has spent millennium trying to kill Character A'. I had no idea why they hated each other or where they came from. And the twist. I made it up after I written a massive flashback scene.

It's one of the things I love about the recklessness of NaNoWriMo. Everything is doable, and nothing is off the table.


An impromptu trip to A&E for my son (he's fine) almost derailed me, but waiting rooms are a good opportunity to whip out the old phone and chuck a load of words into a Google Doc. Today was all about an epic fight, one much bigger than  the last. The main characters first real challenge. In fact the scene was so big, I didn't finish it even with over 2500 words done, so I'll hit the ground running for day 15 and the half way point of November.


The epic fight continues. I had a few moments planned before I started it (a helicopter meets an 'explosive' ending, and a cruise ship isn't left very seaworthy) buit stringing it together was touch. Fight scenes can be difficult, especially in first drafts. There's a lot to keep track of with characters moving around and scenery getting chewed up. No doubt during the January reread before edits start, I'll spot a lot of continuity errors.

And that's another week out of the way. I'm still over the moon with my progress so far, and confident with how much is still left in my imagination to put on the page. I'm setting all kinds of personal records, and this might be the first year I upload my 50,000+ on the day validation goes LIVE. Fingers crossed.

How are you guys doing? Are your stories going as planned, or have crazy things and new characters made an effort to derail (or improve)? Share your stand out moments from the first half of NaNo in the comments below, or on twitter (@BrianSCreek).

It's all go for the second half now, as November 30th and 50,000 closes in. Good luck tyo all participants. Keep writing. 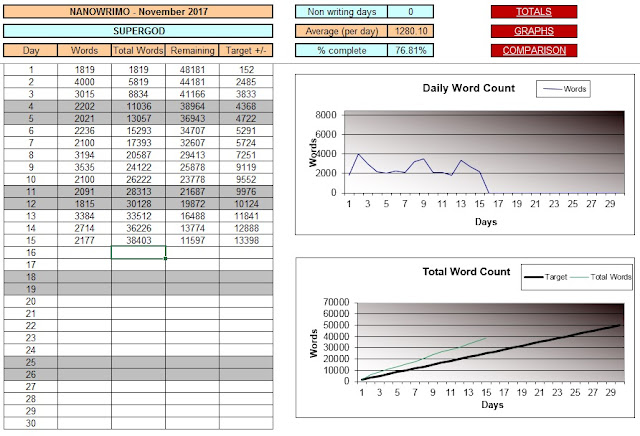