So, THE INFERNAL CLOCK has been out a couple of weeks now and it’s been doing pretty damned well.

A collection of 24 horror tales, each fitting snugly into its hour slot on the devils clock, the anthology was the brainchild of twitter regular and 50% Father of Flashdogs, David Shakes. Available now on Amazon in both futuristic e-book and classical paperback.

As an added bonus, you can head on over to ‘The Infernal Blog’ and check out interviews from the collective contributors, and get an insight into the authors that gave their blood, sweat, and tears to this most awesome of projects. And find out which foods we all hate (seriously, these are in depth interviews!).

Aaaand, if that wasn’t enough, below is an added, added bonus as I delve into the making of DELAYED, my entry for the anthology that sits in the shadows of 6am. 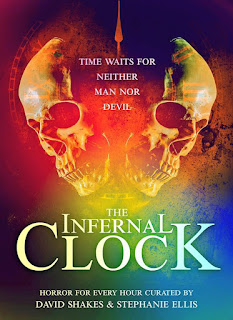 When David’s idea exploded on twitter last year, I was extremely happy to be allowed entry among such a revered group of writers. But it didn’t take long for me to realise that I’d taken a bite out of a genre that I wasn’t normally comfortable in.

I’ve never really been drawn to horror. I’m the guy that waits for the scary movies to hit DVD so that I can turn the sound down and have the bright sunshine over for company. I have never read Barker, or Herbert, or Jackson, so reproducing their chills and frights would be difficult.

But I have read (and enjoyed) Stephen King, and more recently his son Joe Hill. And they do horror in a way I can identify with. A horror not of the slasher style (like Myers or Krugger). Their stories are of the human horror and of everyday objects or situations twisted and evil.

I didn’t want to mimic King (sacrilege), but it was a starting point.

I’d avoided the time slots I assumed would be snapped up, and instead settled on 6am without really thinking about it. Looking back now, I’m so glad I did. I can’t think of another idea I could have done in any other time of the day.

Now, to me, 6am is the start of my day. It’s when I get up, before anyone else in my house. It’s discovering on the news which new horrors have beset the world. And it’s when I say goodbye to my wife and son and hop on a train that takes me two stops to my place of work.

Right now we’re heading into summer and the mornings, though still a little chilly, are becoming gorgeous. But Autumn and Winter can produce some very creepy vibes as I stand on the platform, waiting for my train to arrive. The foggy glow of platform lights. The distant sounds of the world waking up. The electric charge as trains, unseen in the darkness except for that blinding light, ride the tracks closer and closer.

It was one such morning when my story began to form. 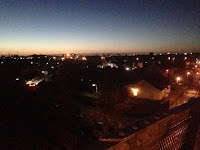 The basic plot came quick. I wanted a character who done something bad in his past, and I wanted that character to get on a train in the cold, dark, early hours, and never reach his expected destination.

Peter appeared almost fully formed. In fact, he literally hit the ground running. It comes a little later in the final piece, but the scene where he’s running for the train was where his journey originally started for the both of us. I saw him as an overweight, lazy, tardy, idiot, and that’s what I got. He’s a friendless screw up.

The next thing I worked on, after getting him to the station, was the train ride itself. I tried several things; from and out-and-out spooky ghost train rushing past and ‘grabbing’ his soul, to Peter getting on an ‘earlier’ train (much to other commuters shock) and falling into another realm, to a train over a train, a dimensional slip if you will (that’s still in there, that moment where Peter feels a little sick, while no one else gets on board).

Gareth was there too, in the early drafts. He started as an old best friend, before turning into the bully. In fact, in the second draft, Gareth was a mean sonofabitch from the off. It was only after a few more rewrites that I gave him a softer edge in the present day. He became a man on a mission, and less the bad egg he used to be.

But it wasn’t all plain sailing. 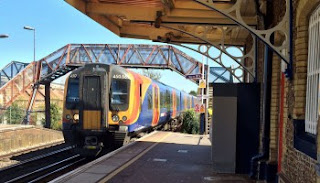 The thing I had the real trouble with was that train accident. Originally the train aspect was only the setting. But as I went on, I decided to make a better reason why events had to take place on a train, I had to link the accident from the past to the form of punishment Peter was about to receive.

So I hit Google and looked into train accidents. I considered using real life ones at first, and picking something really dramatic. I had Peter as an older guy, and made him a signal man who had neglected his post. I then changed it to put Peter on the train, but that made it tough for him to survive (without turning into Bruce Willis in Unbreakable).

I constantly found myself tangled. So I did what has worked for me in the past; I took a break.

I was several weeks later that I returned and two things happened that solved my issue. Some more research led to the discovery that a mere coin on a rail track is enough to derail a train. I was also perusing my books to find my next read when I stumbled onto Stephen King's DIFFERENT SEASONS (specifically STAND BY ME) and had a spark that solved my accident in the past. 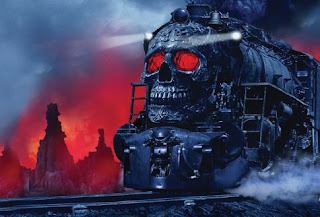 And so another rewrite commenced. It was so close to being done I could taste it. But, like several King novels, while I was happy with 80%, the ending irked me a little. I just couldn't tell why. It was short, sharp, and had Peter being thrown from the train into a stereotypical infernal abyss.

My wife agreed that it was rushed and not in the same quality as what had come before. But it was all I had. Was I just going to have to accept it as was?

So I turned to fellow FlashDog and awesome author Liz Hedgecock for a second opinion. She agreed with me that it wasn’t right, but it was the last few words of her comment that seeded a new and improved idea in my mind.

I found this bit quite incongruous with the rest of the story - it feels medieval and Biblical, whereas the rest is contemporary. It seems not quite a fitting or appropriate end for Peter - thinking of ancient hellish punishments like Tantalus and the grapes, where you're tortured by the thing that sent you to hell in the first place. I was expecting something train/crash related. -Liz Hedgecock (27th July 2017)

Liz had hit the nail on the head. While I had linked his ‘crime’ to the mode of transport that would carry him to his punishment, shouldn’t the punishment also reflect this? Of course it should. So all I needed was a suitable threat to end on. Enter another King inspiration; Blaine.

I’m a massive fan of The Dark Tower, and Blaine the Mono is a truly insane creation. The thought of a maniacal engine barreling down a track evolved into a monster of a train and a Peter trapped and forced to run the rails forever and then some. 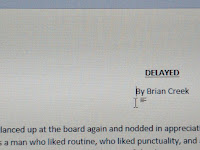 I’m proud of all of my published stories to date, both the anthologies and the Flash contests, but this one is my favourite yet. For starters is the biggest piece I have out there, but also, the process was a great journey. And I’m grateful to Liz Hedgecock for helping me over that final hurdle (seriously, go check out her books - at the rate she publishes, there should be a million titles to chose from by the time you finish reading this).

Go and buy INFERNAL CLOCK, and read those interviews.

And then go write some horror yourself. Or what ever genre you normally avoid. It might produce something great.