Not in a proper way. Not formal. Not with my own book out.

But this week is so full of cool news that I just couldn’t hold back.

So I mentioned last year about the birth of an awesome project from the mind of one man and his tweet.

David Shakes came up with the idea for a new anthology, one a little different than we’d all worked on before. This time he wanted Horror, and he wanted stories short, and he wanted 24 of them.

Within an hour of his initial tweet (how fitting), 24 slots were booked up by us eager authors. The plan was to give each author a 1 hour time slot within which to set their haunting tale in. Thus the book would contain a 24 hour period of hell.

My story, DELAYED, is included; a piece I’m extremely proud of. I don’t normally write in the horror genre; I don’t read much of it either (outside of Mr King). But I wanted to have a go, and I’m grateful that David let me. I read through the piece a few days ago, and it’s the first time I’ve read a story of mine some time later and not hated it, or wanted to go all George Lucas on it. Either I’ve learned to accept a story as complete now, or I’m getting better as a writer. Or both.

So, if you like horror stories, if you like short stories, or if you just like supporting talent, then head on over to Amazon and pick up a copy today. 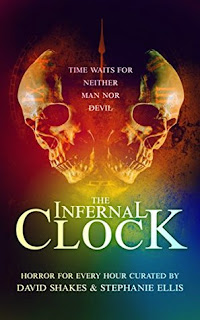 In other publishing news, one of my favourite indie authors, Craig Anderson, has released the third and final book of the Lucky Beggar trilogy.

Regular visitors to this blog will know that Craig was the author who pulled me into the world of Flash Fiction. It’s because of the path that he set me on that there exists actual books’ containing my stories.

His first book, GETTING LUCKY, was the first e-book I downloaded onto my first ever e-reader. It was pretty self-contained and well written. Then out of the blue came the sequel, as well as information that it was part of a trilogy. LUCKY SHOT was a great follow up, but now the problem was that I expected more, I expected the finale.

Well the wait is over folks. Craig has launched LUCKY BREAK, thus completing the tale of the Lucky Beggar, and doing so with the same wit and drama as previous installments. 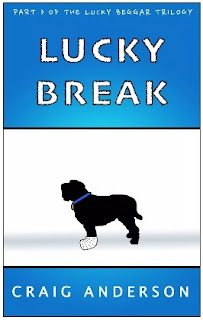 And finally, I dipped my toes in Flash Fiction again this weekend with my story I AM A GOD. It's been a while. I've had a tough week (a trip to A&E last Friday was part of the inspiration), and I just wanted to write. It was a compulsion on Sunday night that I hadn't expected. But write I did. Scroll down further for my entry (and try not to read it in Chris Hemsworth's voice).

And that is all. Lots of good news, indie author wise.

My own project, UTOPIA FOR PAIRS (working title) is still coming along nicely, despite life really (REALLY) trying to get in my way. I’m still on course to have it out by the end of the year. The sooner, the better, but I won’t rush it out unfinished.

So until I step up to the blog again, get reading, get writing, and get publishing.

I am surrounded by illness.

For five hours I have sat in his sterile place, suffering in agony while watching the drunk and the drugged cause havoc, drawing the attention from the nurses and doctors.

I should not even be here.

Pain? What is pain? Something that bothers mere mortals. I am a God, and so above such things.

She rubs something on my forearm before sticking a needle into a vein. It hurts.

“And I keep telling you; I am not crazy.”

She attaches a receptacle to the end of the tube and dark red blood starts to fill it. Once she is done, she pulls it apart, screws a lid on the receptacle, and places it in a tray atop the trolley beside her.

“Careful with that. A God’s blood is the most precious thing in the universe. It can cure any illness, fill a dying man with the strength of twenty-”

“I will forgive you for your ignorance, your people are primitive. But you must cure me so that I can return to my realm.”

She pulls the needle out and places something soft and white over it.

“I am as mystified as you. Something has torn me from my home, and dumped me within your plane of existence. Perhaps that is why my powers do not work at the moment.”

“Take your stuff, go around the corner, sit in chair seven, Someone’ll be with you shortly.”

I want to shout at her, to call down the very thunders of my realm and smite her. She talks to a tall man wearing a yellow vest. He gives me a look, one I have given mortals many times over the centuries.

I will bide my time then. I will wait until they fix me. Then I will find a way-