Hello readers. I need your help.

HOME MADE COVERS ARE EVIL?

While I'm not ready to shout about this yet, I'm planning to release a collection of Flash Fiction soon. It's coming along nicely and I'm learning all kinds of stuff regarding formatting. Seriously; I have watched a lot of YouTube videos recently just for learning purposes.

But that's not my problem. You see, along side said project, I've been working on its cover. I know a lot of people say you shouldn't attempt your own covers unless you've got the skills (I do not), but at this early stage in my 'career' I am aware of two important factors.

1) I really can't afford to pay someone to do a much better job than me.

2) It's a learning process first and a product second. I need to do this so that my skills can grow. My next book will have a homemade cover, and the one after that. But I plan to get to a point where I can afford covers to be redone.

IT STARTED WITH A BANG

So, like I said, I've been working on this cover for a while. The basic original design has remained the same, but a title change and a lot of tweaking has got me close to being done.

Because this is a collection, a mix of fantasy, thriller, horror, sci-fi and more, I knew I didn't want anything specific on the cover like a location or a character; nothing to shout a specific genre. I pictured an explosion, a flash if you will, and set about building my idea using very primitive tools (also known as Microsoft Office).

Step one was opening up Powerpoint (the best program I currently own for manipulating and layering text and images). I set the slide to portrait and, because I'm planning to eventually print this collection too and I'm a fan of the 5x8 sized books as opposed to the 6x9, I set the slide size to this these dimensions.

Next was to 'build' the flash. I used the shapes function in Powerpoint and pulled out two; 'Explosion 1' and 'Explosion 2'. Alternating them, rotating them, and reducing the size per layer, I then added the colours before putting a banner along the bottom that would later hold my name. 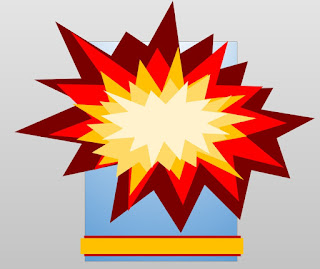 While the image goes over the edge of the slide,
the thumbnail on the left only shows the contents of the 5x8

Next I added my name along the bottom and the working title, FLASHTASTIC FICTION using font OCR A Extended. You can see that I made the 'tastic' lower case and the 'Flash' a different color to help the mostly made up word stand out and read better. The wife talked me out of this. 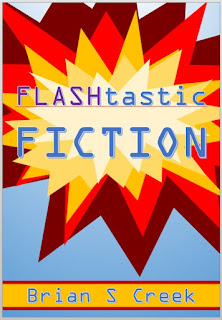 The next stage was the important one. Using the thumbnail, I copied the 5x8 image into Word and then utilised the Artistic Effects option. Below is the effect called 'Glass'. I liked it immediately because it destroyed the perfect edges and gave the explosion a more chaotic and natural look.

And that's where I left it for a few weeks. At the time I thought it was the best my skills could accomplish. 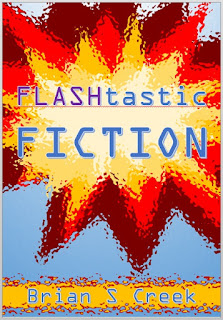 While working on the book itself one day, I took another look at the cover and felt a lot more unhappy with it. While I knew going in that I was only going to get a basic looking design, I thought I could do better. And instead of tweaking, I decided to start again. 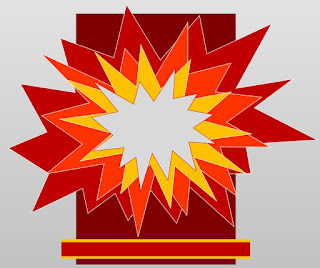 Losing the blue background worked straight away. I also made the explosion a little better, took out a yellow level, and added white and red outlines to the shapes.

And then I changed the title.

FLASHTASTIC FICTION was originally called FLASHTASTIC 500, but having that many stories I was happy with turned out to be more than optimistic. Then, the more I looked at the cover, the more I realised I didn't even want the words FLASH or FICTION in the title. I don't know why.

It wasn't until I looked on my FlashDogs book shelf and spotted Liz Hedgecocks 'Bitesize' and Tamara Rogers' 'Double Vision', that I figured out what direction I wanted to go for the title instead.

So I sat and stared into space, mulling it over, for about 40 minutes (I'm not joking), trying to think of words that would make a good title until . . .


THE TITLE SAYS IT ALL

BRISK WORLDS does exactly what is says on the tin. Each story is its own new world and the stories are super quick reads. Read one, read many. Doesn't matter. But it will be a roller-coaster ride through universe after universe, each one stranger than the last.

So I entered the new title and played around with layout, fonts, and colours.

I tried ERAS Bold ITC. I tried TW CEN IT. I went back to OCR A Extended. Finally settled on Gungsuh. This I can't tell you why. I scrolled up and down that list, trying every font Microsoft Office had to offer and Gungsuh just felt right. 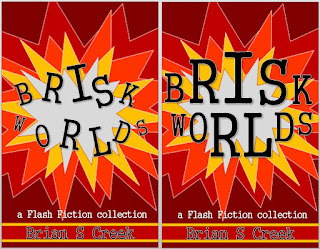 I carried on tweaking; little things here and there. The title font went black then blue then white and then, finally, clear.

I added a border, raised the title bar, enlarged the explosion once more. I went back to Artistic Effects and saw what else I could do.

It turned out that I liked a lot of the effects as a finished piece. From the twenty-three effects on offer, I found nine that worked. A couple of friends narrowed this down to four.

That's where it should have stopped. The final four looked good. They each make a fine cover.

But, as I sat down last Saturday, my wife out for the evening and my son heading off to dreamy dream land, I went through the covers again and again. Something still wasn't right.

It would have been a waste of an evening if the idea hadn't eventually reared it's ugly head. It was the title font itself that looked so out of place. The effects were beautiful, but the title looked false, stale, just laid over the top like it was.

And the lines of the explosion were still too clean.

So I went at it again. This time I did two things different.

First I changed the template version to 'glass' effect and THEN I changed it to another effect. This made the explosion look wild and natural, more so that any other version I'd done so far.

And then I made the second artist change WITH the title involved.

I really couldn't be happier. And I'm glad I didn't give up. I know there has to eventually come a moment when the product is complete. But you also have to be 100% happy with it. If something irks you, even a little, if something is gnawing at the back of your mind, it's probably a good idea to listen to it. You'll only regret it later.

I'm glad I kept going. I have liked each step better than the last. But the irking has stopped now so I know I'm finished. I've done all I can with the limited tools and skills I own.

I now have four designs that I really like.

And that's where I need you help.

Below are the final four designs. I would be happy with any one of them being the final cover for my Flash Fiction collection. And as I stated at the beginning of this artical, it's not professional, but I've done the best I can with limited tools. Down the line it'll get a revamp. But what ever the result, I'm happy for my first ever published work to go out dressed in one of the below outfits.

So, use the comments, tweet me @BrianSCreek, or use #BriskWorlds or #BriskWorldsCover and let me know which one you favour.

Thank you for taking the time to read this, and if you comment, thank you for your opinion and assistance.

So, without further ado, the four finalists vying to be the cover of BRISK WORLDS. 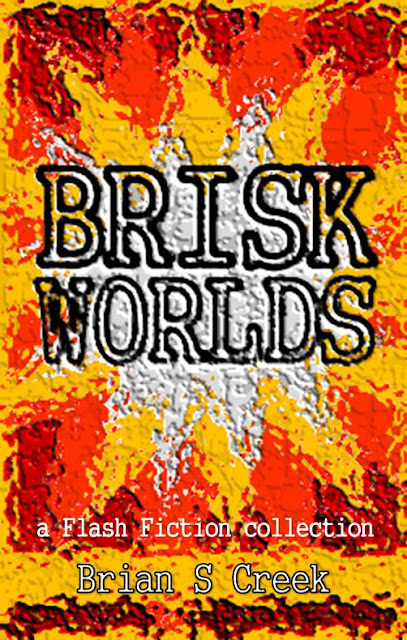 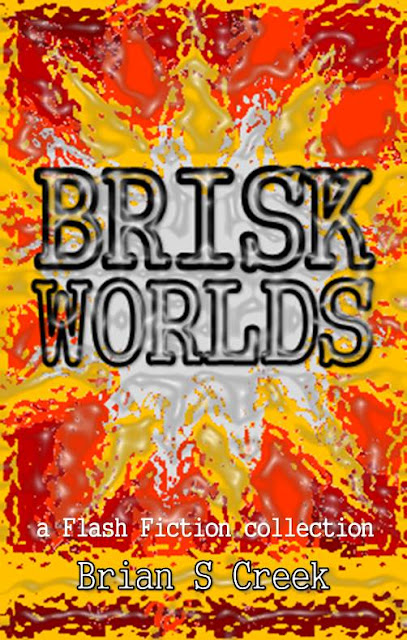 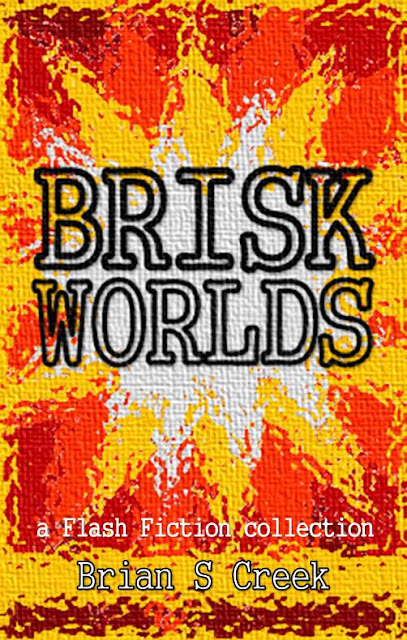 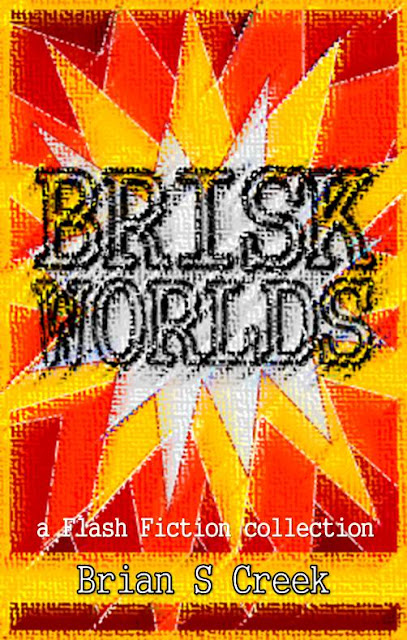