This final day was all about cleaning up the end of the alien invasion and returning the hero home to realise what he has to do now. But the aliens were only the first finale. He still had to fight the ultimate villain of the story, a being that could destroy all existence. I managed to start this fight scene and was clear of my planned word count for the day (and over my final target word count) so I didn't need to write more.

But then I sat down with dinner and watched Captain America: Civil War.

After the credits rolled I felt rejuvenated, and while I didn't have the time to finish the book properly, I got down the key points of the fight, of resolution, and the ending I didn't know I wanted until I got there. It's very rushed (the hero works out how to defeat the villain via an epiphany with absolutely no foreshadowing), but it'll all be sorted out in the next draft. I just really wanted to have something like a plan down on paper before putting the novel aside (unlike 2010's I AM BROKEN, which to this day still doesn't have it's ending) and more importantly, I just wanted to write THE END. It was a nice bow on top of my best NaNo ever.

And that's the end. Thirty days of writing that has been an absolute blast.

I've really blown myself away this year with how much and how fast I've written. Just to be clear, I'm not bragging. I'm quite the introvert (aren't all us crazy authors?). But I can't be anything other than proud of what I've accomplished in thirty days.

What surprised my during this and some other prvious NaNo's is that when I expect to not do well, I seem to surpass what is necessary. Back in 2007 when I took part for the first time, I had nothing but free time, and yet I allowed myself to be distracted by a games console and found myself slipping behind (only two late night writ-a-thons managed to help me over that finish line).

Others years have been the same, yet when 2013 rolled around, life had pilled a lot of writing distractions on me. I have a one year old son, work was hectic, and I was living in the dinning room of my father-in-laws bungalow. I was quite stressed and depressed at the time, so I only took part in that years NaNoWriMo to cheer myself up and provide a distraction. I was already accepting that I would't get far into it. And yet I found myself unable to stop a lot of days, getting a good thousand done on my lunch break, and a further one or two thousand done in the evening with my laptop balanced on a foot stool.

Last year was truly something special. I was coming through a period where my stress, anxiety, and depression had me seeking professional help. The way I was had affected my home and work life and I wasn't the easiest person to be around. But that constant of November writing couldn't have come at a better time and gave me something to focus on. And considering I only really committed to it the night before it started, my story came through complete, finished on the evening of November 30th, and smashed my previous word count record. Considering some years I made it to 50,000 and stopped, last year the story pushed me forward so that I wrote almost 15,000 more than necessary. With zero road bumps or stalls, and no write-arounds.

I honestly never thought I get that much done again and was happy to leave UTOPIA FOR PEARS as the flag upon my NaNoWriMo mountain.

And then this year happened and, despite new personal problems and work being even more stressful, I blew UTOPIA out of the water. The story just kept giving, and with it being set in my favourite genre, it wasn't difficult to stay excited. I know a lot won't be used in the final version, and there's a lot more to be added over the already epic (for me) word count. But I see what it should be, where it needs to go, and have been happy to let the randomness of NaNo add a few extra characters and plot points that I hadn't considered but know will be important to include. 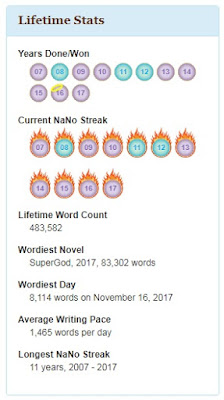 So, the plan going forward? Well I have the other project I'm working on which I took a break from during NaNo, and then SuperGod is what I'll be working on to get out before NaNo 2018. And who knows what I'll be writing come November next year. I look forward to finding out, and I wonder if, just maybe, I can set another word count record again.

Before I go, a big congratulations to fellow FlashDogs Casey, Nancy, Holly, Steph, and Liz, as well as first timers Craig and Mark. These guys set out on the same journey as me and all crossed the finish line followed by a raised a drink at 'The Validated Writer'. November saw the birth of 7 new worlds from these writers minds, new worlds you may hopefully see in the near future.

Anyway, I'm off now, taking a break from writing for a few days. 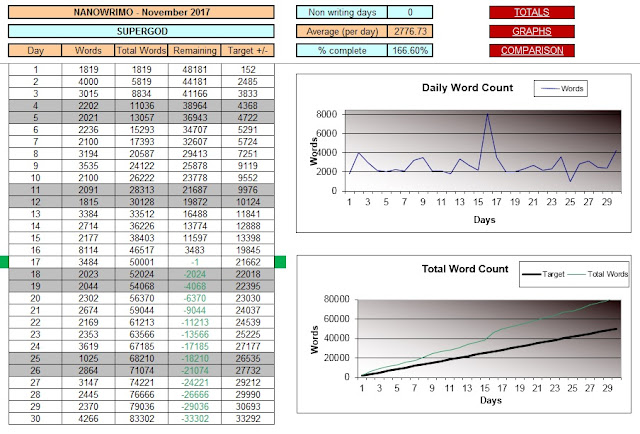