November is almost over and NaNoWriMo is coming to and end for another year. After crossing the finishing line as early as the 17th, and having the pleasure of validating the day validation opened up, I've been able to just enjoy myself for the last week and just see where the story goes.


With our hero stuck on the surface of the moon, and no obvious way to get back to Earth, day 23 consisted of me writing stuff until a solution presented itself. This was the first time I got a little worried during this story, but just when I though about skipping ahead and sporting it out at a later date, something materialized. It will need some fleshing out and setting up in the next draft, but I like it.

And as I close in on my personal record for NaNo (2016's UTOPIA FOR PEARS hit 64034 words), I'm looking forward to exploring this epic ending.


First off, this day is awesome because I beat my previous NaNo Record. SuperGod is the story that keeps giving, and while some years I've hit 50,000 and just stopped, whether I'd reached the ending or not, this time I just can't stop carrying on. My aim it to push myself to add 50% and hit 75,000.

I got a lot done, even going back onto the laptop when I'd already done enough for the day. With the hero back from the moon and ready to kick ass, it was time to get the pieces in place for the finale (well, the first one, anyway).


From such a high over the previous week, I was brought back down to earth with my worst NaNo word count since the end of November 2015. A lot of it was time; being out fore the morning, working on an IT issue for the afternoon, spending time with the family, and watching the Formula 1 qualifying, I didn't even boot up the laptop until 8pm.

Add to this a scene I wasn't enjoying where I'm, beginning to move the players into position, and it was very stop/start. I'd write a couple of hundred, log off, chide myself for not hitting the target, and try again. It was the first painful day this year, and I'm just glad I got over 1000.


Coming off the back of a crap word count, I made the effort on day 26. My son was compliant, and gave me a good hour where he just sat and played quietly, and I crossed the 1667 feeling good. After lunch I pushed it past 2000, working on a scene that is my ode to The Suicide Squad, which should have been enough. But like day 24, I had one more effort when I didn't need to and closed to almost 3000. I actually planned on going on again later, but found myself tired watching the Formula 1 and called it as job good enough.

I'm in that annoying part where it's all build up for the finale and you don't ant to write too much and slow the book down, but you also don't want to rush it and shoot you load with out preparing the drama. Hopefully the drafts will fix this.

And less than 4000 words to go for my updated target.


This day went better than expected. It's the men on a mission scene now as the group go head to head with the alien invaders. They may be the last hope for planet earth, but that doesn't mean that they have to get on. I'm enjoying the conflict between the characters, something I'm not always good at writing.

This was another day where I thought I'd done enough, see I was just 200ish words from a milestone, write a bit more, then find I was 200ish words from another milestone. My inability to end a day just a few words short of something on my spreadsheet looking tidy is a massive carrot on a stick. People would say I'm weird, but it puts words on my page (and I can make them good words later).


Another good word count day and I managed to achieve my secondary goal of 75,000 words. Woo hoo! Though the wife has annoyed me by uttering the phrase "I reckon you could make it to 80,000." So on I go. To be fair, it shouldn't be too difficult as I'm still in the middle of the first epic finale with the hero and his small team knee deep in alien scum. And things are starting to look tough.


This was some tough writing. It's easy to write a lot of the first draft without a plan and without details, but with things coming to conclusion, it's been hard to tie everything up.

Part of this is because, although I'm not physically editing as I go, my brain still thinks of things to add, delete, or alter when I get to rewrites later. And without an actual plan (because I didn't know what I would have at my disposal when I got to the last third) it's hard to write an ending that makes sense and has punch. Some characters that were big in my plan have faded from the story, while other ones that were completely new several days ago have turned out to be very integral players in the story.

So while I'm looking forward to working on draft two early next year, I'm scared because I can see how much work there is to do.

On the plus, I got finale one out of the way (some parts were rushed because my character's motivation and personalities are very 2D and paper thin) and with one day to go, it's all about the big fight; hero vs villain SMACKDOWN!!! 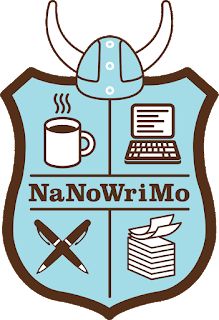 And that's nearly all I wrote. There is just one day left of NaNoWriMo 2017. I can't believe how quickly it has flown by. Not long until advent calendars are opened, then it's Star Wars, Christmas, and before you know it we're all saying Happy New Year.

Since I last posted, 3 more @FlashDogs have crossed the finish line. It's good to see the group that formed writing very short fiction spreading their wings and coping with 50,000+ words. Hopefully there will be more FlashDog related works in the next couple of years to adorn everyone's bookshelves.

For those of you closing in on 50,000, best of luck to you. Whether you're just a thousand away and will ease over it tomorrow, or you've got a mountain to climb and plan on doing some mad dash mega writing, the main thing to remember, crossing the line or not, is that you made yourself write. That's more than a lot of people who say they 'want to publish a book' do. And there's no law that says you can only use what hits paper in November. If you don't make it, you don't have to stop. While the NaNoWriMo winners badge can make you feel good, a finished book sat on your bookshelf is the ultimate prize.

Let me know how you're all getting on, either in the comments below or on twitter @BrianSCreek