A deadly hush falls over the crowd as the final days of writing calmly come to a close. It’s just four more sleeps before the adventure begins, a time when every word written is a step towards the legendary 50,000.

Nested nicely between Halloween and that first chocolatey day of advent, sits a writing event that I stumbled across back in 2007. National Novel Writing Month; the challenge to write 50,000 words in just 30 days.

Now, while I’m (still) not a published author, I do have a few projects sat on the back burner that only exist because of NaNaWriMo. Whether these projects will ever be completed, or if they’re destined to remain trunk novels that I just needed to get out of my system, is irrelevant. I am just glad that I found a way to sit myself down and write them.

NaNoWriMo is born from that drive to switch off your internal editor, to get words on the page no matter what, and to grow a story, some characters, and a brand new world, as you go along.

In 2007 I started with just a basic premise; what if I was friends with the Grim Reaper? Over the course of the following 30 days I added new characters, devised an alternate system for how death works, chucked in angels and zombies, and planted the seeds for two sequels. All this from a single idea and two characters. It was so much fun exploring as I went. Sometimes I’d get stuck and ‘skip’ a chapter, maybe coming back to it later. Halfway through a main character became a bad guy, something I didn’t notice was happening until the reveal itself. It’s all so loose, so fluid. It’s all about discovery.

It was a tough year, that first one. No writing buddies back then, it was just me. And that was the year I bought an Xbox, nearly derailing the whole thing. I can see now, looking back, that I made a bad decision not waiting until November was over to make that purchase. Yet a little part of me is glad I did. Because, falling behind allowed me to do some epic late minute writing (with two days left I somehow managed to write 7941 words in one day, nay one session, that ended at 3am on the 30th). While I try to avoid putting myself in that situation again, it’s empowering knowing that if I need to write that much, I can.

A year later I returned to challenge myself again, to prove it wasn’t a one off. This time round I took the first two chapters of a superhero story I’d started earlier that summer and went with it again. As before, characters appeared, plots twisted around each other, but it all turned out pretty damn good.

It was a bit easier that second year. I had hindsight and experience. I also had something a little closer to planning because I was working from an idea that had been sat in my head for years.

I could be forgiven for bringing a little confidence to the table when November 2009 rolled around. I had a 100% strike rate so far and I was getting ready to work on an idea that was very well planned out. The story of an agoraphobic boy who finds himself trapped in the world of his favourite fantasy books, MAXWELL COOPER should have been my easiest NaNoWriMo yet. The book was divided into seven mini stories, allowing me to move around as and when necessary. I had the whole plot planned out. I had a large cast of characters for our hero to meet. And I also had writers block. I guess I could have done without that last one. That was my first fail.

But I didn’t let it put me off. A year later and I was gifted with something all writers crave; free time. I was made redundant and put on garden leave. This meant that I couldn’t start a new job, that I didn’t need to go into my old job, and that I was still getting paid. It was effectively a three month holiday . . . and November sat right in the middle.

It was no surprise that I crossed the finished line that year. In fact I crossed it early, and managed an extra 8000 words on top of the target. And the kicker is, the story still isn’t finished. It was my most epic idea, something that I know I’m not ready to go back to just yet, but one I can’t wait to work on it in the future.

In 2011 I failed after trying to start 2009’s project again. I can take a hint and have avoided that story ever since (even though the wife really wants me to finish it). 2012 saw my zombie western brought to a sudden halt by a house move and the early arrival of my son.

After becoming a dad, I assumed that all my writing time would fade away. I didn’t think I would find the time to type anything, let alone 50,000 words, and it was made more difficult by the cramped living conditions I was experiencing at the time.

And yet somehow I did it. In 2013 I avoided writing a whole novel, and instead began my ode to the TV shows I used to watch growing up. I began work on my most successful NaNaWriMo to date; a supernatural TV-show-style episodic project. Ten novella’s with individual adventures that carry a series long arc through the middle.

It was fun, planned, and once again nowhere near finished when December rolled around. But it was somehow easy. I got into work early and wrote. I blocked out the world with soundtracks at lunch time and wrote. I got home in the evening and wrote. My wife supported me, my friends supported me, and my work colleagues supported me too.

I liked writing episodic. I’d discovered Flash Fiction last year and I like working shorter. So for NaNo 2014, I planned an epic Fantasy story broken down into bite sized pieces. I have never planned a NaNo as much as I did last year. Maps, plots, character histories, species, Gods, cities. It went on and on. I started planning it from the March of that year, took a break with an unrelated novella during CampNaNo that July, and then carried on planning and replanning right up to the starter pistol firing.

And again it all worked. I was hitting writing targets with more ease than I did in the early days. I crossed the line with a couple of days to spare. And I had a couple of writing buddies for the first time ever, people that were new, and others who I’d met from the Flash Fiction community.

Which brings me to this year.

As it stands, 2015 is the year that birthed CHRIS AND MIKE vs THE WORLD, and in July I expanded the first of their Flash Fiction stories into a novella. While I’m still working on the second draft of that project (which a recent illness lost me two weeks of working on) I’m going to use this year’s NaNoWriMo to carry on expanding a couple more. I don’t know how many, though I’m planning two at the moment. So hopefully, by the time I open day one on my advent calendar, I should have complete first drafts for CHRIS AND MIKE vs THE FOREST OF DEATH and CHRIS AND MIKE vs THE TEMPLE OF GLOOM.

Despite the lack of planning I feel pretty confident going in because I’ve spent a long time with the characters and the world. I’ve got a new laptop I’ll be taking into work which means I don’t have to hand write and retype when I get home. This will mean less wasted writing hours.

It’s all building up now. I’m trying to finish the novel I’m currently reading so that reading time becomes writing time. I’ve got my Scrivener set up ready to go. I’ve got my word count excel spreadsheet all ready too.

So that’s it. Four more sleeps and then we’re off. 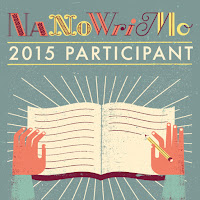 If you’re taking part then drop me a writing buddy request over at NaNoWriMo; the more the merrier. There’s nothing better than being lifted through the month by the word counts of fellow writers. It helped me last year to chase down a couple of my writing buddies. Although I didn’t beat all of them, being in their ‘slipstreams’ helped get me over that finish line comfortably.

As with previous years, my next few posts will track my progress, and I’ll be offering tips and advice as and when it occurs to me.

So that’s all, really. Good luck to all of you participating. If you’re not, but you know someone who is, then cheer them along.