These short posts are becoming the norm of late. Hopefully, once the Anthology deadline of next Monday (Bank Holiday – woo hoo!) is over, and the stories are in, I can get back into the swing of things. 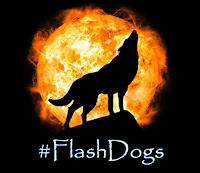 So, update: The Anthology pieces are coming along great, in no small part to the very helpful Emily Livingstone and Chris Blackburn. These guys have offered very useful feedback over the last few weeks and, as well as being extremely grateful for their input, I’m especially grateful for their patience.

My first completed story, COST OF FREEDOM, was sent in to FDHQ over a week ago.

Next up was KNIGHT IN SHINING ARMOUR (slight title change). This is the story set in the same world as TANKS FOR THE HELP, from Anthology one. I enjoyed revisiting some of the characters from that original story as well as introducing a fresh look at the barren world they reside in. I finally got it wrapped up and sent in on Monday night.

So I’m half way there.

All that’s left now are the last minute rewrites on POTENTIAL (I’m close to having that better ending) and MERELY OBSERVING, a piece I thought wasn’t there, the mystery fourth picture that had me shaking my head and walking away in defeat. Well something arrived in my head, half formed, and should hopefully be ready in time.

And that’s been my week. Offering feedback to Emily and Chris while incorporating their feedback into my work. It’s been a crazy ride and it’s almost over. I’ll have a better update and take a look back at the writing process for these pieces next week.

It’s been a busy week, both at home and work, but I still managed to get a few pieces of Flash Fiction done. Going forward I’ll be dropping the Sunday Flash updates and, instead, will post the previous weeks pieces on the end of my Wednesday night blogpost.

Another Thursday brought with it another Chris and Mike vs story. I’m starting to realise that I’m writing myself into dead ends while trying to keep a plot going over several weeks. It wasn’t too bad in the early days just developing the characters over weekly one off adventures. But, with the prompts and photo being random, it makes it difficult to include everything in 100 words. Take this week’s entry; there’s Chris, Mike, the bookends (Face and Book), a photo of two fencers . . . young Chris, time-travel, Chris’s father, Argentina, and a witch. It’s a hell of a lot to tie up in such a small piece. I’m thinking of going back to those one off and seeing how that goes. 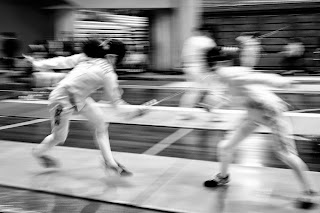 CHRIS AND MIKE vs THE PHANTOM FENCERS FROM HELL

“Face facts,” said Mike. “Your Dad has gone and screwed us over.”

Chris had to admit, things weren’t looking good. For reasons unknown, his Dad had used his younger self and an ancient spell to drag them both back twenty two years, only to scarper, leaving them at the mercy of two phantom swordsmen.

On top of that he’d spotted the corpse of the witch named Eva, his father’s contact in this part of the world, crumpled up in the corner of the room.

Chris gripped the candlestick. “Nonsense,” he said. “We deal with these two spirits and then we go get back that spell book.”

I’m closing in on my first Flash! Friday anniversary and still searching for that elusive win. This week we had to use ‘Downtown’ as the setting. I was worried that the story behind the story of the first entry would be lost but people got it. And the second entry? That was just plain fun. 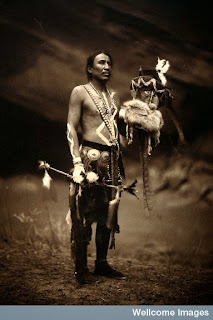 I remember I ordered the Kobe Beef.

The firm had just closed a big deal and the bosses wanted us out celebrating. It was a nice day and the piazza was bustling. Everything was New York and normal.

And then the Native American Indian turned up.

A crowd started building just down from our restaurant so a couple of us went to check it out. A Native American Indian was stood there wearing next to nothing. People took pictures, someone called the police.

And then he started touching people.

Nothing violent or crass. He just touched their foreheads with the tip of his finger. And it wasn’t everyone, either. He was choosing people from the crowd as if he had a purpose. Those touched just stood there with an odd look of realization on their face. It was a surreal thing to watch.

And then he touched me.

My world changed. He’d awakened something in me, in my blood, and I saw the world for what it really was. My heritage rose up inside me. Looking around I could see the others he had chosen, the others like me. Each one was nuzzled by a red halo. Each one knew what they had to do.

And then we were many.

Maurice’s heart was beating fast. He’d talked the talk and now he was walking the walk.

“There you go,” said the teller as she nervously placed the last money bag on the counter.

“Thank you kindly, ma’am,” said Maurice. He tipped his hat because manners are important, grabbed the bags, and walked out of the bank.

“Hold it right there!” yelled a vulture dressed in black.

Maurice spotted the Sheriff’s badge and cursed. His trigger finger itched. “It don’t have to go down this way, Sheriff.”

“Drop the money and the gun, and lay on the ground,” said the vulture.

Maurice smiled at a fine looking crocodile in a pretty dress across the street. She smiled back. In the blink of an eye his pistol was drawn. Each thump of the hammer sent a small Native Indian flying through the air, little axes swinging. The Sheriff dived for cover as Maurice backed away down the street.

Maurice could taste freedom. His horse was just across the street. He made to run, but failed to see the stagecoach barreling down the street.

“Dispatch, the bank robber’s down. Hit by a bus on the corner of Fifth and Eastwood. Looks like he was high on something. We’re gonna need a coroner.”