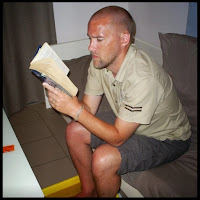 Brian lives on the south coast of England with one wife, one son, and one cat. He works in IT by day and is an author by night. His main source of energy comes from reading a good book.

In 2014 he was bitten by a radioactive FlashDog and gained an uncontrollable urge to write short pieces of fiction. It was four years before the effects wore off and he was once again a productive member of society. His therapist advised he release the stories into the wild as the final step in the healing process.