Two years ago I set out on a journey, one that I thought I’d started so many years ago. I wanted to be a writer, always had. I loved coming up with stories, loved creating characters. But I’d never treated it as anything more than something to pass the time, something just for me to enjoy, something to sit in the huge collection of notebooks and folders, and never see the light of day.

I’d been dragging my feet. Because if I write, then I’m a writer, right? But if I don’t take myself seriously, why should I expect other people to.

So I started this blog, stuck my face out there, and said hello to the world. I opened the door to the little broom cupboard I’d been writing in (note: a metaphorical broom cupboard) and set about doing something about it all.

I’ll be the first to admit that year one saw me dreaming a little too high. Sure, there’s nothing wrong with launching right out the starting gate and laying a work down; giving it a cover, a price, and unleashing into digital bookstores. But I wanted something without knowing what I wanted. Should I write a new novel, fix an old one, or collect some short stories together? I started it all, and at the same time, never really started any of it.

And then Flash Fiction gripped me, focused me, and showed me how to slow down and concentrate on things. I wrote outside my comfort zones, worked to deadlines, and met like-minded people all wanting the same thing; to write and be read.

Sure, I never got my own work out there by Christmas 2014 (my original mission), but I did have work out there. And it was grouped with other awesome work, bound in a professional cover. And you could buy it. I could buy it. Most importantly, my mother could buy it. I ended that year on a high, and figured I was more on track, hoping that things could only get better.

So why did I go and let myself down. Again.

THE FANTASY WAS JUST A FANTASY

I’d started the year with a big project at the forefront, an episodic fantasy tale to be published here fortnightly. It was a culmination of six months planning, years of notes, and a whole NaNo worth of writing.

And it only lasted eleven episodes.

It just wasn’t working. I wrote the first draft during NaNoWriMo 2014 and then edited the first couple of episodes after Christmas, all while planning where the story was going after those first 50,000 words. Yet the more I wrote, the more a different story rose up from within it. I was struggling to write something that didn’t want to be written, all while trying to ignore the story that really did. And it was already out there, so I didn’t have the editing wriggle room I needed.

All I could do was pull the plug. It was still early days. It was a brave move and some people were a little annoyed (sorry Emma, sorry Jo). But it needed to go back to the drawing board, to be reworked and rereleased. FRACTURED DAWN episodes 1-11 were a lesson, one I won’t forget in a hurry.

To those few that were enjoying the adventures of Cook, he will be back, I promise. And it will be better.

THE ROAD TO VICTORY – THE FLASH FICTION STORY

2015 saw me still chasing Flash Fiction wins across three contests. I’d been close a couple of times and I had finally realised that I was just waiting for that combo of prompt, story, and judge.

Amazingly I didn't have to wait long. January saw me obtain my first ever Flash Fiction win over at Angry Hourglass. ROLL BACK, a bittersweet tale of a man and his time travelling roller-skates (I swear I don’t do drugs) was unexpected enough for the results page to give me whiplash with a double take. I’d finally won with one of my stories and I felt a huge weight lift. It was another confidence boast. Maybe I wasn’t too bad at this writing lark after all.

Things carried on getting better with a further three wins through the first quarter of 2015. There was THE CLIMB, a story of marital abuse and revenge, CLOSING TIME, where a waitress’ life is spared by pure luck, and STRANGERS THINGS, the sad story of a cataclysmic event and two lovers who may be torn apart by the fallout.

It was late July when a results page brought tears to my eyes. BEHROUZ AND THE FORTUNE FISH, my Middle Eastern fairy tale, got me my Flash! Fiction win. It was something special, to reach the goal I’d been chasing for over a year. While the Hourglass wins boasted me with confidence on a professional level, the Flash! Friday win was something personal because it was the contest that had started it all for me. Happy doesn’t do it justice.

And the set wouldn’t have been complete with a win at Micro Bookends, which I did in style in early September with a one-two. WHEN THE STUDENT BECOMES THE MASTER was the story of an under-educated father fearing the moment when his two young children surpass him mentally.

While these wins are just a handful of happy Flash Fiction memories (I even tried my hand a judging which was more fun than I expected), the year ended on a sad note; two of the contests I’d been enjoying (and thought would last forever) where shutting down. It was like heading into the woods with your friends and finding that the den you built last summer had been burnt to the ground. It was a hole. The community was still there (they're awesome like that) but two of our clubhouses had disappeared. Would things be the same?

I guess we’ll find out next year. 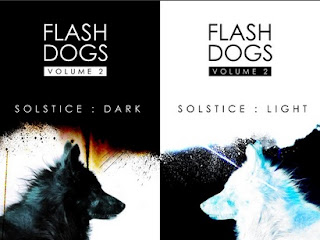 THE ANTHOLOGIES STRIKE BACK

In 2014 I wrote a lot of stories. If you go onto Amazon right now, you can pick up an Anthology that has four of them in it. How cool is that? For as long as I can remember, I’ve dreamed of having my words available to people who don’t know me and now it’s possible.

2015 saw the FlashDogs doing it again with the second Anthology, a two-parter based on the theme of Solstice. And they invited me along for the ride once  more. One Anthology is spectacular, two is a dream come true . . . so when the third one comes out next year I have no idea how that will feel. Visit often and I will keep you updated, but whispers hint at a February release. 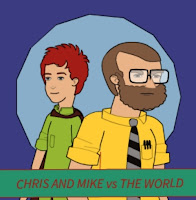 DIDN’T SEE THAT COMING – THE BIRTH OF CHRIS AND MIKE

When I started this blog I couldn’t have predicted the side step it would take from novels and short stories into this thing called Flash Fiction. So it’s apt, perhaps, that this year saw another left field surprise in the form of two characters who not only wouldn’t go away, but grew into my main project from this past year, and look like taking up all of my 2016.

A throw away comment was all it took for me to take two characters from a one off 100 word Flash Fiction story and turn it into an epic ongoing series. What started as two crazy friends fighting off zombies spawned an adventure through time, monsters that thrived on music, the death of a stuffed toy, and a family legacy that could hold the key to it all. Like the bastard child of Buffy, Supernatural, and Doctor Who, each week saw me invent crazy new threats and crazier new scenarios. And each week the plot threatened to strangle me as the cast of recurring characters grew. And let’s not forget that fan base.

In fact it all grew so much, I had no choice but to drop all other projects and make something out of the mess I’d laid down at Micro Bookends.

SHUT OFF THAT EDITOR – THE NANO WAY

It started in July.

I knew that I could expand the 100 words CHRIS AND MIKE vs THE WORLD stories, but going novel length was too much. So I settled on Novella length (about 25,000 words) and set about the planning.

I also knew that NaNoWriMo was my best bet at getting my head down and powering through the project, but that was too far off. So I decided to try July’s CampNaNoWriMo for a second year running. I’d focus on the first book, a smaller goal (going for half my November target), and see if it could even work.

And it did. Better than I thought. I had something. Sure, it wouldn’t hit NYT bestseller lists or win any prestigious awards, but it felt like something I’d like to read and that is all I really want to do. Sure, other people reading it is amazing, but I can’t write for other people. Other people can like what I write.

So I carried the optimism though the following months, expanding on everything that had come before, building backstories and deepening the plot. In November I sat down and wrote the first draft of the next two novellas.

If all goes to plan (and planning is my New Year’s resolution) I’ll have those books in your hands at some point next year. Because damn it, I came here to chew bubble gum and publish books. And I’m all outta bubble gum. 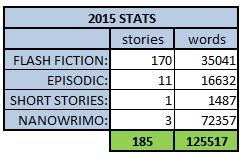 I got wins, I had work published, and I feel like I’ve finally got a project that can sustain me. But that’s not the main thing I’ve taken from 2015.

All those years of half-hearted efforts, false starts, and abandoned stories; distractions left right and centre. Video games, girls, new story ideas. It all got in the way.

2015 had me doing one thing right above all else; writing consistently. NaNo helped as always, but the weekly Flash contests did the most work on that front. And although Flash! Fiction and Micro Bookends are gone, their legacy sits on my hard drive (and several back up memory sticks) with a massive collection of stories and characters that wouldn’t have been there without them. And while it’s not all gold, perhaps I can find some gems among the dirt.

And I will write more regularly next year too. Like I said, it’s about planning. Its deadlines and word counts. It’s getting ideas on paper. You can’t edit what you don’t have. And my imagination isn’t done yet.

And that’s my 2015 as far as writing is concerned. Contests have fallen away, I still haven’t accomplished my goal of being published with my own project, and, as always, I only have myself to blame. But I’m closer still. I can feel it.

A big thank you to all of you that have supported me in 2015. Whether it’s comments, tweets, or just reading this blog, it is all very much appreciated. And when I’m all big and famous, you can say that you remember when I started a blog and my spelling was atrocious and I just waffled on about this project and that project.

Won’t that be funny?

Next year will see a change up in blog format. Weekly is killing me and causing me to worry about what I’m doing instead of just doing it. So 2016 see’s the blog go fortnightly. For those three people reading, I hope this doesn’t frustrate you, and I assure you it’s for the best in the long run.