Just over a week to go now and the pace is picking up.

I’m loving this phase of the story. I’ve gone from expanding on the original 100 words story I wrote back in February, to building on everything I’ve written and planned in the last two weeks. New characters are evolving, changing the story in interesting ways just by being there, and little seeds are dropping, ready to blossom in later adventures.

Although it can be a struggle to create, when the process is working, it can be very exciting for an author. 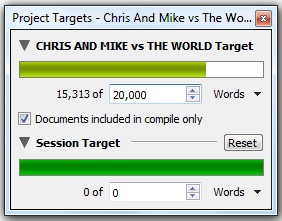 My lowest word count of the week (ignoring two non-writing days – see below), the 16th saw me cross the 50% word count target. It’s all downhill from here (although, ironically, the characters driving up a hill in this chapter). I wanted to get our heroes back into proactive mode. No more running away, no more being confused. It’s all about getting answers now. Chris wants to find out who’s manipulating him, while Mike just wants his old life back. And what better way to get info than to track down an old friend of Chris’ dad.

The old house on the hill, surrounded by woodland, forgotten by the world. Our heroes meet a cranky old man called Jonas who unknowingly gets dragged into their problems. Interestingly, I didn’t realise when I created Jonas, just how intricate he’d be to the plot. It wasn’t until a few days later, walking to work and listening to a movie soundtrack, that his actual backstory revealed itself. Can’t wait for that to unfold.

The first of my more productive writing days (anything over 1000 words in a hour lunch break is awesome), I got to finish up the chapter from yesterday. And I decided to mix it up a little.
When I left Chris, Mike and Jonas the previous day, they were deep in exposition with the plan being to take the car and go for a trip.
No danger, I thought. Needs a bit of action, a bit of livening up.
What better time for the bad guys to track them down and attack Jonas’ home.

I struggled to find time to write today. On the plus side, I had a fantastic day out with my mate and our sons, so it wasn’t wasted time.

Still, there’s always a little twang when you go to bed, and the word count reads zero.

Another busy day meant I had my first consecutive ‘zero days’ of the project. I was not happy. I was busy all day and the only writing I got done was for a Flash contest. After that it was off to the cinema to see Ant-Man in 3D. But even a great Marvel film couldn’t wash away the guilt. And the only thing worse than a zero word count is seeing my word count target slip into the red.

Today was a change in that I decided to take a break from the main characters. Instead, I used a chapter to pick up the shadowy villains plot from chapter one. Although it’s still secret to both the reader and the main characters, it’s good to update the parallel plot with the hero’s journey, to keep it fresh in the readers mind.

And it also gave me the opportunity to ‘kill off’ and office colleague who was getting on my tits.

Back with Chris and Mike and I managed another 1000+ word lunch break. I realised that I knew where my main characters were going next, but I realised that they didn’t. So this is investigation scene, an info gathering scene, as our heroes learn the identity of the mystery woman who is hunting them.

And it also digs a little deeper into Jonas’ past, so serving two purposes.

It was a short chapter so I finished my lunch break by setting up the next chapter, one where Chris and Mike return to the block of flats from earlier in the story, and meet the delinquents outside the lobby.

I had a fun writing session during today’s lunch. After finishing off the chapter with the delinquents, which was getting quite confrontational, I got to the scene where Chris and Mike meet the mysterious Dr Gellibrand.

It was fun writing it because I’d trapped my two characters in a room with no real plan on how they would escape. But as the villain revealed her plan (just a little), I found myself in the scene, searching for escape myself. As the dialogue flowed, I saw an idea and grabbed it.

That should have been it but, in dealing with one villain, Chris and Mike had left themselves vulnerable to another. I panicked, considering for a moment whether I’d needed to scrap the scene and start again when I got home from work.

Then suddenly, my brain remembered another character was still in play, and a rather silly solution presented itself.

The relief and the satisfaction from moments like that really make creating this stuff enjoyable. It’s all world building, character interaction, and puzzle solving.

I can’t wait for readers to get hold of it. 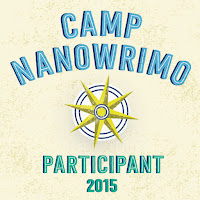 Nine more days to go and only 4687 words before I cross my target. I don’t think that should be a problem, and I plan to go past 20,000. Even if the Rising Dead story line is wrapped up, I still have twenty six more ‘Chris And Mike vs’ adventures to adapt.

This project’s far from over yet.