First off let me thank you for returning from last week. If I could reach through the ‘innernet’ and shake your hand I would.

After last week’s explanation for this blog, the next thing to do is introduce myself and explain what I’ve been writing up to now.

I’ve been writing since I can remember (cliché cringe!). “Sure,” you say. “We all were one way or another. Everyone can write”. But it’s true and I don’t just mean I’ve been writing things using letters. I liked writing stories. No, that’s understated; I loved writing stories. Once I discovered that I could use a pencil to describe the images in my brain for people to read there was no stopping me.

I started in little notebooks at school (notebooks that I still have) and I wrote stories involving time travel, dinosaurs, laser guns and fast cars, each with crude little illustrations accompanying them.

As my friends and I got older we discovered new interests like bicycles, football, Technic Lego and video games. But while different friends drifted to different hobbies leaving their pencils behind, I kept one foot in the door to creative writing.

I grew up in a single parent family with a mother who sometimes had no choice but to work evenings and leave her boys in front of the TV. Every Wednesday she’d rent us a film and get us some snacks and so the VCR became our babysitter.

Before you scoff and cry foul on child neglect and video nasties let me beat you back and say hush. Neither my brother nor I ever turned to violence. We never ran around as crazy lunatics or skulked in the shadows as ticking time bombs, desperate to carry out a headline grabbing atrocity. Our mother educated us and we were wise.

And so, we watched Terminator, Predator, Robocop, Aliens, Nightmare On Elm Street and Big Trouble In Little China. All these films with their strange worlds and exaggerated characters only had one side effect on me; they beefed up my greedy, desperate imagination.

In those years of early adolescence my brain was treated like a body builder with an unlimited supply of steroids. I couldn’t stop writing stories inspired by what I had seen. There was the Die Hard inspired SCHOOL where I rounded up my mates to save the school from terrorists. I thought Commando was good so I wrote about a badass soldier whose codename was ONSLAUGHTER. If I wanted Back To The Future style time travel then I would write one of my INTO TIME stories (most involved Dinosaurs because Dinosaurs are cool). And when a group of British MERCINARIES got hold of Predator armour they used it to take on the scum of the universe.

As you can tell from the brief list above (chosen from many, many more) I was rubbing very close to copyright infringement. Though I wasn’t too bothered about the threat of 20th Century Fox suing me I decided I could do better and started on more original creations. I’d learned what I’d liked and now it was time to shake up my brain and see what came out. 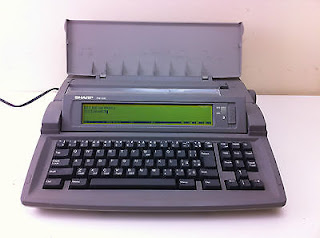 For a while I dabbled in screenwriting, educated by Syd Field and Robert McKee. I bought a cheap SHARP word processor with built in printer. I sat around on the many days when I should have been in lessons that I really didn’t care for, drinking Vanilla Coke and eating Vice Versas and Chuppa Chup lollies, writing formatted screenplays until I found out that I would be unable to get into Bournemouth University (the only place at the time that did a dedicated Screenwriting Degree).

Slowly the scripts moulded themselves back into novels and short stories. The WP died and was replaced by an ex-girlfriends cheap PC. The ideas kept coming and I had no way to stop them. This sounds great; a writer who never stops coming up with stories. Unfortunately it doesn’t go well with a writer who also suffers from a low attention span.

I soon became one of those authors with a large collection of chapter ones and no endings. I think I managed one ending in about five years of writing. I felt like a fraud calling myself a writer. I nearly gave up.

That’s when I discovered three things; a website hosted by a small group of writers (no longer exists), an annual writing completion in SFX magazine called PULP IDOL (no longer runs) and NaNoWriMo.

The writing group was comprised of a really good group of people who, once a week set a word limit and challenged each other to start with a scene, prop or line of dialogue. There were no other limits. It made you think quick and write quicker. When the week was up the stories were voted on with the winner setting the next challenge.

Pulp Idol was a magazine based writing competition run annually for three or four years before it was ditched. There was a 2000 word limit with Fantasy, Horror, and Sci-Fi being the genres available. What I liked most about it was that a book was given away after each competition with an issue of the mag. It contained the stories from the winner, the ten runners up and then the title, authors name and opening line of the remaining shortlisted 39. I made it onto this short list twice and, up to that point, it was my greatest writing accomplishment.

But the most important of the three is NaNoWriMo. I can say, without doubt, that if I had not discovered this website and the group who run it then I would not still be writing today.

National Novel Writing Month (to give it its full title) is simply the challenge of turning off your internal editor and writing at least 50,000 words in just 30 days (the month of November to be exact). You vomit your idea onto the page and don’t worry about its form until you open your first advent calendar door on December 1st.

In 2007 I experienced two of the greatest moments in my life; I married the greatest woman in the world and I finished the first draft of my first proper novel. I’m planning to go into more detail regarding NaNoWriMo in future posts but I will say that it was an amazing experience, both exiting and scary.

I failed 2008; succeeded in 2009 and really succeeded in 2010 (I was made redundant and had a lot of spare time on my hands). 2011 was another failure whilst 2012 was interrupted by the earlier than expected arrival of my son. That’s not an excuse, it’s a fact.

Last year was the most enjoyable yet. I had support from my wife and some great friends (you know who you are) and managed to set personal records in total words written, time to cross 50,000 words and most words in one day. What can I say; like Mr Vettel, stats are important to me.

As always, the December of each year became the January of the next and my enthusiasm faded for each project. I moved onto other projects. Last year I took a ten week writing course during which I wrote some short work I’m quite proud off and made some friends who also like to write as much as I do (and who I must get back in touch with – we never did manage to set up that meet up).

And now we’re here. I’ve started planning things and writing things (see next week’s post) and changing things in my life to move writing up the list of priorities.

I’m going to do this. I’m going to get my work out there and have a book with my name on it alongside other authors in my favourite bookshop.

Your support is appreciated. Without any of you reading this I’m just a weird man with a beard writing a journal that sits in cyberspace. Please pass on to friends and family, especially those who have even this faintest interest in writing. Who knows what fires will be ignited in people.